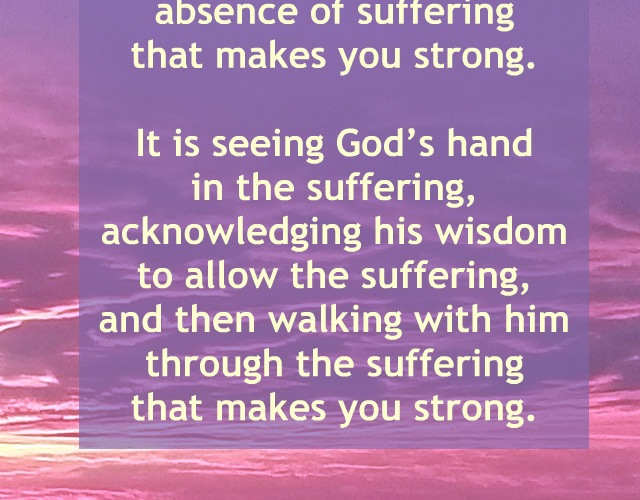 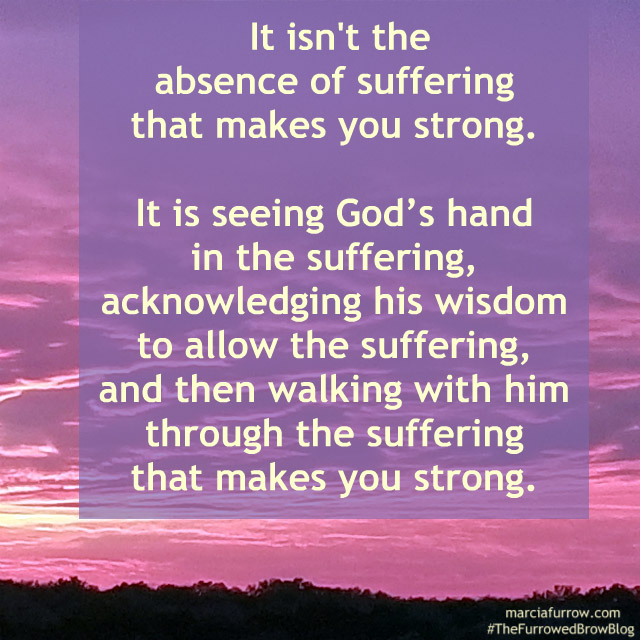 Brian and I watch a TV show that has an amazingly strong female character; a Comanche woman named Prairie Flower. Prairie Flower is one tough cookie. She takes control in every situation, and no one gets the best of her. Ever.

However, (spoiler alert for those of you watching The Son) there was an episode where things changed. Prairie Flower was shot with an arrow. Not to be undone by something as piddling as an arrow sticking through her torso, Prairie Flower broke off the front of the arrow, reached around, and pulled the other half out of her back. My hero! As I said, she’s one strong woman.

This, I think, is a perfect example of how some of us, who have a reputation as being strong, are perceived as living life. Almost nothing can penetrate us, and if something does, well, we just pull out the arrow and move on; after all, we’re strong.

However, the truth is, just like Prairie Flower, hurtful words pierce our hearts, and disrespect and injustice painfully impale us. But most people never see the arrow, nor do they see the wound because we carry on as if we’re just fine.

We assumed Prairie Flower would be OK because she is such an integral part of the show; surely, she’ll survive this assault. But we have to remember that while the creators of the show present her as a strong character, they have given us glimpses into her past. We know that her strength is derived by the way she has dealt with times of suffering. She is not invincible.

For Christians, we know that every season of suffering has been a tool which God used to develop strength in us. We also know that any strength we have is a direct result of our union with the Lord Jesus Christ. We further know that we do not have what it takes to weather any storm, or withstand any assault, apart from him.

Prairie Flower made her way back to the tribe’s campsite and when her family saw her stumbling in, they raced to help her. However, perhaps because they knew her to be strong, they determined she was not mortally wounded, and that the bleeding had stopped.

They were wrong. As the day came to an end, Prairie Flower grew weaker, fell asleep, and then bled out. This strong woman, who had it all together, who never fell apart, who could take whatever life threw at her, could not stop the bleeding by herself, and she died.

It is said that whatever doesn’t kill you will make you stronger, and there is some truth to that.

It is in the darkest night when we see the light of the Lord Jesus. It is in the deepest heartache, that we feel his love. It is in the despair of hopelessness that we learn he is our only hope. It is when we feel like we are falling we know his everlasting arms are holding us up. And we know we won’t fall apart because we trust the Lord to hold us together.

And we boast in the hope of the glory of God. Not only so, but we also glory in our sufferings, because we know that suffering produces perseverance; perseverance, character; and character, hope. Romans 5:2-4

The evil one has a quiver full of arrows that he is ready to use against us, and often he uses people we love as the means for delivering those arrows. While arrows may not be hurled with the intent to kill, as in our TV show, the end result is often the same: Death of relationship. The only antidote for these poison arrows is reconciliation. Reconciliation first to God, and then to each other.

Reconciliation, however, requires acknowledging the arrow was shot, and that it landed. When someone offends us, we must go to them and let them know their arrow struck home; it penetrated the heart, and we are hurt. If we delay, the infection of bitterness sets in, and the death of the relationship begins.

If you are in a relationship that is dying, is it because you shot an arrow, perhaps thinking it couldn’t penetrate the strong person you aimed it at, but it did. Could that be why the relationship is slowly bleeding out? Do you owe an apology?

Nevertheless, it is your responsibility to go to your offender and tell them you’ve been offended – this is how God designed the first steps of reconciliation – it’s on you, the hurt one, to make your pain known, rather than allow the relationship to bleed out.

My challenge this week is to lovingly go to those who’ve hurt me and tell them that I’ve been wounded. To go with a heart for reconciliation. To go with my eyes wide open, understanding that I might not get an apology; but to go with a willingness to forgive no matter what.

_______________________
If you were blessed by this post, please like and share to bless another
Marcia’s book, 365 Days of Grace — is currently available on any of the following links:
BarnesAndNoble.com
WestBow Press
ChristianBook.com
Amazon.com

8 thoughts on “When Suffering Doesn’t Kill You”